Saved in Other sites of interest, Sour Grapes recommends, Wine 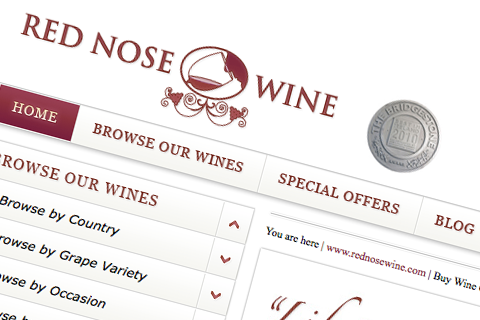 The latest in the introjuicing series is with Gary Gubbins of Red Nose Wine in Clonmel.

1. Gary, from reading your site, you have an engineering background. What did you for a living and how did that take you to the wine business?

I worked for Ericsson for 4 years, based in Dublin but mainly on medium term contracts all over the world. Mexico, Montreal, Stockholm to name a few. Expenses are a great way to see the world. I then went working for myself and took a contract with Alcatel in Paris.

My already unhealthy fascination with wine went into overdrive and most weekends were spent in Parisian wine bars/shops, or in the Loire Valley or Burgundy.

The longer trips tended towards Bordeaux and the south. Eventually real life caught up with me, and I moved home – a combination of a job I did not like and an with an MBA, Red Nose Wine emerged. The vines were planted in 2005 but the first wine was sold in 2008.

2. You seem to have a specific focus on southwest France. With all the recent new world arrivals, what does this corner of the old world have to offer us?

I think that the south of France in general has a bit of everything – wines for putting down and wines for enjoying young. The lack of rigid rules that are affecting other parts of France and Europe are definitely helping. Mostly. I think it offers us passionate people who care about what they do, and are proud of what they make.

I firmly believe that wine is about the people who make it and where it comes from. I believe in terroir-driven wines, but they are not to everyone’s taste and I think it important to accept and respect that some people prefer simple wines. I try to cater for both, although I do try nudging people up the ladder when possible.

After Paris I moved down south and when you get to know them, the southern French are a really friendly, warm and passionate people. Mind you, if you get on the wrong side of them, they will eat you without salt, as we say in South Tipperary. I also think the Loire Valley is hugely underrated.

3. You completed an MBA with a focus on the business of wine. What was the topic and what did you find?

The thesis was called “Fine Wine as an asset class” and it involved creating a statistical model for predicting financial growth in fine wine, and in particular the 1855 Classification of Bordeaux wines.

In the barrel room at Leovill Les Cases

When you talk about wine as an investment, you are really only talking about Bordeaux. The model took 4 variables, classification, appellation, release price and quality (as determined by Mr. Parker ). It basically constructed and tested a valuation model for growth. Using a multiple regression statistical model and 10 years previous data, I was able to get a very accurate prediction of year on year growth. I then tested it against 2004 (a normal vintage) and 2005 (a crazy vintage).

On the back of my thesis, I cowrote a paper with the head of the university’s finance department and it was presented throughout the wonderful world of academia. It was very well received and more work is planned. Red Nose Wine and an unhelpful economy keeps getting in the way.

4. On a similar note, wine for drinking or for speculating and trading on?

The big question. Unfortunately, at least for lovers of great Bordeaux, wine speculation is rife and some of the icon wines of the world are becoming unattainable. As part of my thesis I managed to convince Chateau Margaux, Palmer and Leoville Las Cases to grant me an interview. Being the professional I am, I felt the need to travel for said same interviews. I got to taste these wines in the chateaux and they all lived up to their reputation.

The reception at Chateau Palmer

Would I spend the money on them to drink? Probably not – well maybe Palmer. I think that there is value in their 2nd labels, the wonderful Pavillon Rouge, Alter Ego and Clos de Marquis. I did buy Margaux and Palmer for investment in 2005 and they are doing quite nicely.

Not everyone bought a car with their SSIA. They lie in bond somewhere secret, as I don’t want the temptation.

5. Where do you see the Irish wine industry in 5 years time?

I hope that the government step in and take control of this sub cost selling. Absolute rubbish wine is flooding the market and being offered as loss leaders and ultimately putting small vineyards and independent retailers out of business.

I would like to see the real independents working together to educate the wine drinking public about the difference between commodity “Coca Cola / Big Mac” wine and real handcrafted wines. I have tasted fantastic Chilean wines, but you rarely see them here. The big brand movers rule the roost, and I can understand the need to turn over a container of wine quickly.

But for every 10 pallets of commodity, bring in a palate of something interesting. If they don’t, then all you will have is a selection of brand wines, back to the bad old days.

I hope the Irish wine industry will align more with the local food producers, and start to work in parallel. I am doing a lot of work with the Tipperary Food Producers Network and there is a lot of crossover. As an added bonus, the money goes back into the Irish economy.

6. What do you like most about the Irish wine industry (and least)?

When I came back to Ireland, I worked for a while in the Celtic Tiger construction industry. I have never seen such greed and thievery from the top down. All the sub contractors were forced to tender under cost and try and make their money back on extras. It was dog eat dog eat cat. The wine industry, by contrast, seems full of genuinely nice and helpful people.

I don’t like people who come in and only want to spend €4 on a bottle of wine for their wedding. I also find it very hard to stomach that many restaurants insist on buying very cheap and average wines, and then charging silly prices for them. I have no problem if they offer the house wines for €17/€18 but when they look for €23 for them, I think they are missing an opportunity.

If they paid a euro more for the wines, they could really find something special that will entice people back. People will come back for a good wine at the right price.

7. Any unusual or new wines coming in which your customers are responding well to?

We have a range of French wines that have been hugely successful. The Chateau Margui wines have really been a hit. Philippe Guillanton makes truly unique wines and has them in Michelin Star restaurants all over the world.

Alain Ducasse is a huge fan and it is a perfect example of a wine for under €20 that could easily pass for €40.

Our Chateauneuf du Pape maker, Nicholas Boiron, recently won the Decanter 5 star award for the much heralded 2007 vintage. His Cotes du Rhone has also been a huge hit.

The Daumas de Gassac wines across the range have been very popular, but for quality & price, I would say that the Viognier based Faune and the Cabernet – Syrah – Mourvedre Albaran wines have been huge. Only €12, but they really do taste of a whole lot more. And that’s the key I think.

8. Back to Bordeaux and the ‘09 vintage, what do you make of all the hype?

I went through this for the 2005 vintage, but with a few exceptions, it’s rarely worth this hype at the high end. I am sure in 20 years time it might be, but there is an opportunity cost to money, and in the current climate, I am not sure that the value is there.

I would also have concerns about the alcohol levels in the wine. What you might find are great bargains in the Cru Bourgeois wines or even the generic Bordeaux wines. In saying all of that, the Chinese market could force the prices into orbit, but will it keep them there over time? – it could be a fad and wine investment is long term.

Also, the counterfeit wine industry could end the Asian interest. One good thing is that there is great value to be had in forgotten great vintages like 1996. I managed to get some Langoa Barton 1996 and 2000 for a great price recently.

9. Price of a bottle, at what price threshold/limit does the price exceed the quality and take on all the trappings of tradable asset like property, gold etc.?

I think that after €80 it is very hard to justify a wine you can sit down and drink. Even at that, it would want to be spectacular. I say to a lot of my customers, that if they spend €20 on a bottle, they should be blown away. This is where the independents have a huge advantage over the multiples.

That €15 – €30 bracket offers phenomenal wines that you can build a memory on. There is a big gap between wines of €80 to €300 where there are so called icon wines, but not very tradable.

There are only a handful of wines that you can actually easily move at auction. Most so called “tradable” wines will be hard to move in a hurry and force you to find a fool, as they saying goes.

10. Your top wine of all time, what wine made your toes curl and what wine that you haven’t had yet is on your “bucket list”?

A very difficult question, as I usually associate a great wine with where I drink it and who I share it with. I have tasted most of the 1855 wines and Margaux was great, but I probably preferred Leoville Las Cases, Palmer or Cos d’Estournal.

I love Brunello and also Piedmont wines, and have a real soft spot for the leathery wines of Bandol.

However, my epiphany about wines came in a small rustic old winery in Aloxe Corton, in Burgundy. I was on one of my weekend excursions from Paris and a Bordeaux nut at the time. I wandered through this little village known for its whites more than its reds. I tasted a 1999 Premier Cru Aloxe Corton and finally got what all the fuss was about. Pinot Noir is easily my favorite grape variety, and I have tasted better examples of Pinot since, but the little old man in the shed explained to me in French why it is so hard to make a good Burgundy as I drank his one. They say “all roads eventually lead to Burgundy” and I have been a fanatic every since.

Incidentally, my best beer was a bottle of Corona in a shack beach bar at the southern tip of Capri at sunset, as Bob Marley played on the stereo and a goddess swam alone in the sea. The waiter served free bruchetta and the goddess kept diving into the sea from the cliffs. Funny the things you remember.

As for the bucket list, being a Burgundy nut, I am going to go with the cliché here I am afraid. Domaine de la Romanée Conti – La Tâche will do fine. If anyone wants to give me my first taste, I am ready and waiting.

“Life is much too short to drink bad wine”