The wines of Bodegas Terras Gauda

I recently got a selection of samples from Terras Gauda, a group of wineries in northern Spain. Samples are actually full bottles, which is great and as I’m no longer working to strict deadlines since the demise of The Sunday Tribune, I took my time with them, having them on a Thursday and into Friday over a couple of weeks.

Rias Baixas is located in Galicia, in the little nub of Spain that juts over Portugal. If you’ve ever been to Santiago de Compostela (or St. James of the Field of stars) then you’ll have been pretty close by and the reason I mention the Santiago de Compostela, is because it is on the pilgrim paths that it is thought the grape was brought there. By whom? German pilgrims, possibly with a bit of forward planning, brought vines with them from their native Rhine. And it’s also thought that’s where the name comes from, Albariño, Alba Riño - from the Rhine. Anyway, don’t let analysis of grape DNA get in the way of a good story, so onwards to the wine.

The vineyards for this wine are between 150 to 450 feet and get around the same average rainfall as we do in Ireland. This is “green Spain”, after all. It’s a gorgeous zippy wine, not too unlike a Riesling, but without the razor-sharp edges. A really nice balance between citrus fruits, crunchy apples and the refreshing acidity (I often find that dry Rieslings are tilted too much towards the acidity). A perfect partner for seafood or with a good spicey Asian dish. 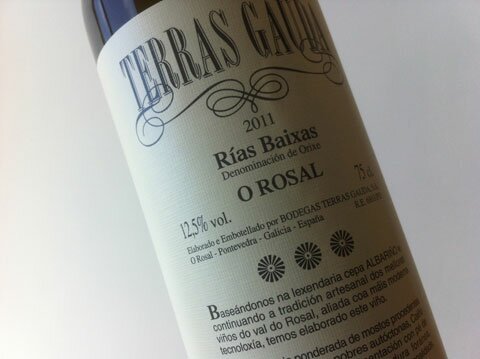 The one wrapped in paper, one of my favourite Albariño, which isn’t quite accurate as there are also some local grapes in the mix, 20% Loureira and 10% Caiño Branco. The grapes are grown in a subregion of Rias Baixas, “O Rosal” on the banks of the Miño river. While this still has the zip of an Albariño, it also has greater depth and texture. Less citrus, more apples and peaches and some good old slate minerality too.

Similar to the O Rosal, Albariño, Loureira and Caiño Blanco. Beautifully made wine. I haven’t found any availability of it here in Ireland – which is a shame. In addition to a wonderful zippiness, it also has a lovely soft texture and a slight saltiness which conjures up a beach location drinking it with the bounty of the sea.

All three are great wines, perfect for summer drinking – just make sure you get that summer window to get the best out of them!