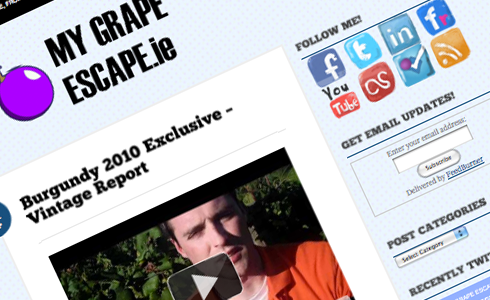 Strewth! It’s been over a year since my last guest blogger post. Up this time is the relatively new kid on the block blogger on My Grape Escape, Eamon Fitzgerald.

Where did your love affair with wine begin?

It was the hot summer of ’04 and I was wondering how best to spend the holiday months after my first year of college. Working a crab shack on a J-1 in Rhode Island didn’t exactly appeal to me, and I hadn’t the sense of adventure that my fellow student friends had to inter-rail around Eastern Europe.

To supplement my college degree of Business and French, I decided on something France-y and something wine-y. Sure wouldn’t a month as a vendangeur (grape picker) be ideal? Hot weather, free wine, camaraderie with fellow pickers (who knows, a bit of romance even?), and good honest graft.

And when a place called ‘Latour’ emerged as my destination, I got excited. I had vaguely heard of this great Château Latour, and the prospect of setting foot on its hallowed grounds intrigued me.

Or, was it even something to do with Le Tour de France, the greatest cycling race of them all? Well, I was way off on both counts. Turned out to be ‘Latour-de-France’, a tiny remote hamlet in Southern France. Alas, no majestic castle; no Lance. It forms part of the Côtes du Roussillon Villages appellation, in the wider exciting Languedoc region containing the likes of Minervois, Fitou and Corbières.

Anyway we jet in and after a comical ride in the back of a pick-up truck we are brought to our living quarters – a terrifying abandoned garden on the outskirts of the village. The only facility was a little shed (at least it was something), but upon opening it we discovered our fellow pickers and friends for the month. Three lads and a girl and a dog. Now, Beatriz was a pretty girl, but it was hard to think beyond her mohawk hairstyle, pierced septum and abundant tattoos.

Any budding romantic notions were quashed fairly quickly. The rest of them looked the same. They were squatters and street performers from Barcelona, and similar to Mexican workers converging en masse to the great vineyards of California each harvest season, the iconic hills of Perpignan play host to an invasion of odorous dreadlocked pot-smoking hobos each September.

I’m sure they had equal doubts about four clowns from South County Dublin in their rugby jerseys and havanianas. After the initial culture shock they turned out to be really fun and interesting people, and it put our initial misconceptions and judgments to shame.

And so we were put to work. The local regulations stipulated that no watering, fertilisers and pesticides could be exercised on the vines, and all picking must be carried out by hand. I think this was borne out of necessity more than any sort of quality control, due to the terrifying steepness of some of the vineyards, and the arid rocky barrenness of others.

Natalie, our boss, owned lots of land under vine, but worked for the local co-operative, which each day specified which variety of grapes to be picked according to ripeness, sugar/acidity levels, weather conditions, le horoscope, mood, what the dog thought, and so on.

So each morning after we rose around 6 it would be a frantic rush to pick whatever Carignan, Syrah, Grenache, Mourvèdre, Merlot, Chardonnay or Muscat that stood in our way. Pretty straightforward work – you have a pair of secateurs (hand pruners) and you cut the bunches of grapes at the stem, letting them fall into the bucket underneath the bush.

Unfortunately, the bush is usually about the height of your midriff, which was too low for standing and too high for squatting. I developed unusual bulging muscles in my lower back akin to a baboon as a result of an awkward stand/squat posture for a month. As your bucket filled every couple of minutes you would empty it to the porteur who would pass by saying ‘Allez, Vide!’ (‘Empty up!’). However this was repeated every 2 minutes for 9 hours a day, 6 days a week, for a month.

So by the 6,480th time José asked me to ‘Allez, vide!’, I was most definitely on the brink of hacking him to pieces with my little secateurs.Seriously though, grape picking gives you a unique appreciation of the pain and effort that goes into producing that bottle of wine that we enjoy so frivolously.

One day Natalie misread the blackboard in the co-operative and we mistakenly picked the grapes of several vineyards that turned out to be unripe and therefore useless. The whole lot had to be dumped, and the image of Natalie, sitting on a rock, devastated, with her head in her hands, still sits clearly in my mind.

Another disaster occurred when a pair of secateurs went missing (they would be regularly counted). It was assumed that they must be have been left in a bucket and subsequently thrown into the back of the truck, so they couldn’t be sold to the cooperative (a pair of metal secateurs would be enough to break the whole crushing machine), and again the whole lot had to be dumped. Natalie’s strength in these times was admirable, as was her constant drive and encouragement of us as energy and spirits often sagged.

A full month of this work was tough, and you had to ignore the fact that as far as the eye could see, in all directions, there were masses of vines bulging with ripe fruit to be picked. We would advance along in lines picking the grapes, and now and again if your neighbour was lagging behind you’d jump onto their row and help them out, and they would do likewise to you if you were struggling. Go team!

Overall though, playing a part in the making of red, white, rosé and vin doux naturel wine, and witnessing each stage in the production of wine from the vine to the glass was pretty cool.

Here are my highlights and lowlights.

When Lar asked me to do this guest blog I jumped at the chance to join the big boys; the Christopher Giffords, Paul Kiernans and Kevin Ecocks of this world who had walked tall before me on this column.

So like any wheeler-dealer Premiership manager I hunted around for my marquee signing; my signal of intent to the Irish wine blogosphere. I had returned to Latour-de-France a year after my experience while on a family holiday and purchased some of the wine that I’d personally contributed to making, and luckily I still had a couple of bottles of red lying around. So how did it taste 6 years on?

Dark garnet in colour showing indication of age. Disappointing nose with very little fruit, maybe a whiff of cherry, with stony mineral tones dominating. Where was all that bloody Carignan I picked?

Very dry palate was devoid of any fruit, I detected faint liquorice and herbs but I was really clutching at straws at this stage. No trace of a month’s supply of blood, sweat and tears. Disappointing, but expected given its age.

Eamon blogs over at mygrapeescape.ie