Notes & a video from my Chilean trip, this time to producer Cono Sur

Saved in Other sites of interest, Wine 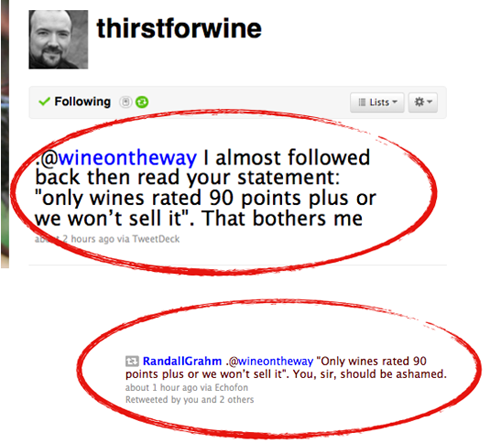 When you’ve lost your corkscrew, a shoe will do (video).

Read more on When you’ve lost your corkscrew, a shoe will do (video)....

Festival of the Valleys, Ballyvaughan 28th-30th May

Saved in Other sites of interest, Sour Grapes recommends

The historic village of Ballyvaughan is to be transformed as it plays host to the spectacular Festival of Valleys which is taking place this weekend from Friday 28th May to Sunday 30th May.

Read more on Festival of the Valleys, Ballyvaughan 28th-30th May...

Sheridans Cheesemongers are hosting their Irish food festival this Sunday, the 30th May. It will be held at their Virginia Road Station headquarters in Co Meath. Kevin Sheridan describes it as: “a really great opportunity to celebrate the wonderful artisan foods of Ireland and the people who produce them, now more than ever we need [...]

Saved in Other sites of interest, Sour Grapes recommends, Wine

Introjuicing Gary Gubbins from Red Nose Wine. Inside, how he got started, speculation and investment in Bordeaux and thoughts on the Irish wine industry.

Australian Icons on sale in The Corkscrew, Dublin

Australian “icons” on sale from The Corkscrew in Dublin.

Read more on Australian Icons on sale in The Corkscrew, Dublin...

Following on from three wines from Chile, is a press release from industry body, Wines of Chile (Vinos de Chile A.G) which represents many of the largest wineries in Chile.